“A gem cannot be polished without friction, nor a man perfected without trials” Lucius Annaeus Seneca

With the current Paralympics in full flow and the success of the Brits thus far it’s seems the apt time to share this incredible story of determination, courage and passion.

A month ago I met with runner Charlie Lewis and we talked about his story, how he became and amputee after a skiing accident and the tough choices he made just so he could have the freedom to run again. 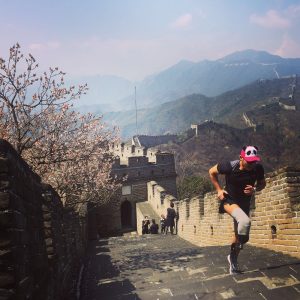 What inspired me so much about Charlie was his courage and will power to run again. After 12 years & 15 expensive reconstruction surgeries Charlie made the decision to have his leg amputated. What surprised me was how much of an easy decision this seemed to him, maybe because with hind sight he could see how much more able he’s become with his blade when compared to his damaged leg.

Charlie explained how the 12 years since his accident his leg was getting worse. So much so that when entering a room he would scan for the closet seat knowing that if he made a B-line for it he could sit there and not have to put any weight on his extremely painful leg for a while. For an athlete this is horrible, we all know what it’s like when we get injured and can’t perform to our best, well imagine walking alone being extremely painful and watching your health and physical appearance is decline.

Twelve years ago, I was a 19-year-old living in the French Alps, within a bubble of all things mountain. Like every bubble, it was only a matter of time until it burst. In February 2004, while skiing the back-country in Val d’Isère, I quite literally fell off the mountain, resulting in a right leg broken in several pieces. I was helicoptered to hospital, operated on immediately – and there started my adult life.

I was flown back to London, but within weeks I was back in hospital and going through the first of four major reconstructions that would span 12 years and 15 operations. Before the accident, I was on a path to what I hoped would be a career in rugby. Afterwards, any participation in impact sport was gone. I found my salvation in cycling, which took me up various mountains and along many roads.

Unfortunately, by late 2012, the leg that was so delicately held together had, once again, started to fail. I couldn’t move without excruciating pain, I lived on drugs and I drank too much. I spent a good six months ignoring it, culminating in trying to cycle up Mont Ventoux, a Tour de France classic and a hill I had cycled up on many previous occasions. It was halfway up when it all hit me: the pain – not of muscles craving oxygen, but of a leg craving medical attention. I remember coming off the bike and sitting by the side of the road in despair. I also remember the embarrassment I felt that I hadn’t made it to the top.

A decision needed to be made on a next step – amputation was a word that had been bandied about several years earlier by a pragmatic surgeon, but subsequently avoided. But by then I knew it was only matter of time. In 2013, I set the ball rolling – but it wasn’t quite as straightforward as I thought.

When alone and in my own space, I knew what I wanted – I wanted to run again and I knew what was needed to make than happen. However, orthopaedic surgeons are fixers – they like to fix bones – and amputation isn’t necessarily a fix. I remember sitting in consulting rooms being pitched against amputation – it was surreal and highlighted the importance of me taking control of the situation and indeed my own destiny. When making fundamental decisions in life, its good to talk – but people’s views are generally based on their own personal experience. They can give advice on what they believe they would do in the situation – but it’s not their situation.

Until you’ve had something taken away, you don’t realise or respect just how much it means. Running is freedom, something we, as humans, were born to do. Although, in my interim post-accident years I cycled ferociously, it never filled the void.

So, on 8 January 2014 – my 29th birthday – I hobbled into Charing Cross hospital and had my lower right leg amputated. The page was turned.

It was a bumpy first year. Six months later, I had to have a minor reconstructive operation – I hadn’t managed to run yet because of the complication, but four weeks after the second (well, 15th, really) surgery, I had my first proper weight-bearing prosthetic. I jumped on a train with my bike to the south of France for a date with a gremlin on Mont Ventoux. It certainly wasn’t my quickest ascent – especially given the storm that blew in and almost took me off the mountain, again. But I did it.

Then, two weeks later, I was lucky enough to be given a running blade – it was fitted on the Friday, I bounced on it that day and then raced my first triathlon on the Monday. It was a sprint race with a 5k run, which I did in 25 minutes. I had a pair of crutches strategically placed on the course in case it got too much.

So, that was me, up and running – almost 12 years since I had last cantered. I can’t say it was a euphoric moment – I felt proud for a minute or two but, really, it served as the foundation I could build on; I could run again, but how much further would I be able to run, and how much quicker could I do it?

Eighteen months on, and I’m still learning the ropes as an amputee – my main weakness is knowing when to stop. I stop when – and only when – it really hurts, which results in days and weeks off my leg and all kinds of silly little injuries. Along with my running coach, David Chalfen, I complete a “make every kilometre count” programme of four runs per week alongside a busy cycle, swim and gym schedule.

So far this year, I have raced a 10k with an unexpected personal best in January of 38:04. I had my first sprint triathlon in late March before heading to North Korea to compete in the Pyongyang Marathon on 10 April, then Austria for the St Polten IronMan 70.3 on 22 May. I then came back to shorter-course triathlons, time trials and 5km and 10km races for summer.

The Pyongyang Marathon may seem a bizarre choice, but it highlights another great thing about running – there is almost certainly a race in every place on the planet. War, political regimes, climate, topography, poverty, plight – these things don’t stop people running. If my lifetime allows, I will attempt to race in every country in the world. In the meantime, I’ll keep on running – and, when it hurts and I’m low on motivation, I’ll remember how far I’ve come and how much further I got to go.

I really feel this is a powerful story, not just because the success Charlie is now having or the tough choices he made. But the way it’s changed his out look on life, his accident happened when he was still a teenager when life is much more fickle and materialistic. Sure 12 years past and he grew from a teenager to a man but his strength of character and the motivational resources he can now pull on I think only a few can relate too.

As we often to say without the heartbreaking and testing lows you can not really appreciate the euphoric highs, life needs contrast. It’s up to you how you view, deal and adapt with these moments that counts.

“A gem cannot be polished without friction, nor a man perfected without trials”